The fascinating beauty of Indian’s nature can be seen in the 80 national parks, 440 sanctuaries and about 23 Tiger reserves protected and established by the Goverment of India, where there are at the least 4000 endangered Tigers being protected from the poachers and wildlife hunters.

South India is linguistically and culturally the real home of the Dravidian’s, although ethnic Dravidian are found in eastern as well as central India. The Konkani and the other Indo -Aryan tribes had made South India their home adopting the culture and learning the local language. The major states of South India includes the state of Andhra Pradesh, Kerala, Tamil Nadu and Karnataka. South India is rich in flora and fauna with some of the most exotic wild species found in the region.

The south Indian sub continent is home to more than 500 species of mammals, 1225 different varieties of Birds, 1600 types of reptiles and amphibians and about 57,000 species of insects. The vital point to take notice of is that India harbours about 60% of the worlds Tiger population out of which around 25 percent is covered by south India and the rest by the whole of India.

South India has a picturesque land scape and it is referred to as the photographer’s and the nature lovers paradise. Some of the amazing wildlife seen in the sanctuaries, parks and the forests are the protected leopards and the Tigers, antelopes , sambhar, deers, bison and a large Elephant population. Among the prominent species of Birds are the Malabar trogon, crested serpent eagle, and the Malabar pied hornbill. The water birds includes the water fowls and the wild ducks. Tourist from all over are invited to view the wilds in their natural habitats.
Get Free Tour Quotes

The major wildlife sanctuaries in the different states of South India are : 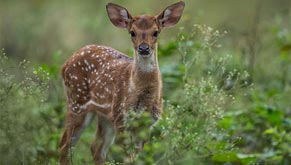